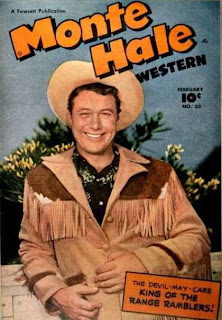 All Access reports: "ALL ACCESS sends condolences to the family of singing cowboy MONTE HALE, who passed away SUNDAY (3/29) at his home in STUDIO CITY, CA. He was 89. HALE appeared on several television shows and films, including "Gunsmoke," "Giant," and "The Chase." One of his good friends was fellow singing cowboy GENE AUTRY. HALE and his wife, JOANNE, co-founded the GENE AUTRY WESTERN HERITAGE MUSEUM, later renamed the AUTRY MUSEUM OF WESTERN HERITAGE."
Posted by Desdinova at 7:01 PM

Making Fun of Complainers On Air Is Fun 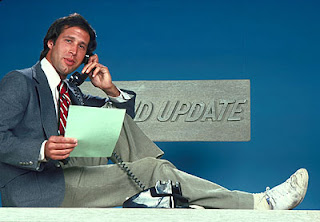 Remember on SNL, when someone would try to give a cranky rant during Weekend Update and Chevy Chase would make fun of that person behind their back? My belief is that is what we in the media need to do to those who have complaints about us. Especially, when they have no valid point other than "I don't like that." I think it is a shame that this area seems to believe that a person, like myself, with a FCC licence and a Bachelor of Science in Media, shouldn't have any say in what goes out over the air but when old man Fussmucker calls to complain it leads to firings, format changes and other bad ideas.
If we make it harder for these people to complain, then we won't have to deal with complaints.
For instance:

Posted by Desdinova at 9:10 PM 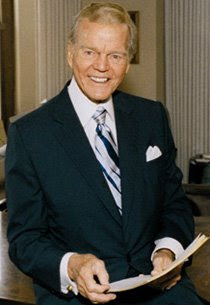 Legendary radio commentator Paul Harvey died Saturday at age 90. While I was not a big fan, let me say this about Mr. Harvey. He was the last of a long line of radiomen who read the news in their style. He was preceded in death by Walter Winchell, Gabriel Heater, Alex Dryer, Lowell Thomas and those guys at the beginning of the original The Day Earth Stood Still. He gave the news with an editorial or feature segment. He probably didn't care if you agreed with him or not. He also didn't need pre-screened calls from fans nor did he need to make fun of a person who disagreed with him. To Paul Harvey, the news was not about how the Right should crush the Left, but that both sides needed to work together in order for America to work (Remember "Bushel of Wheat for a Barrel of Oil?"). That was the theme of most of the Rest of the Story shows. Legends that Paul Harvey told with a great element of surprise.

Paul Harvey was a conservative, but unlike the talk radio goons, he never gave us shocking stories about Satanic cults living in tunnels under the city or college girls forced to have lesbian sex in front of class. He never said he put himself on the same level as God or called his shows "excellence in broadcasting." He just opened the show every day by saying "Stand By for news." Just news.

Here is a very good story by KYTV's Steve Grant, which features Harvey speaking in Springfield at an appearance through KWTO-AM.

Here is The Chicago Trib's trib to Paul Harvey

This is Desdinova the Super Villain of the Ozarks...Goood DAY!
Posted by Desdinova at 5:34 AM