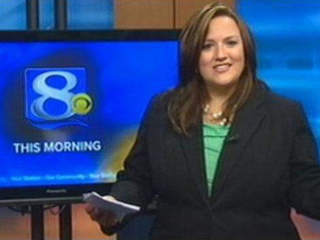 I have posted anything on this blog in awhile. I prefer the more fun and less controversial post on the retro blog. However, I wanted to comment on this story because it hits home to me. Since I'm involved in the Countdown to Halloween, I decided to post this here since it is also in keeping with many of the themes of this blog.

Not since Jet Blue flight attendant Steven Slater have I been so proud of someone for standing up for themselves. No doubt you have seen this video of WKBT anchor Jennifer Livingston responding to a hateful e-mail from a viewer.

I'm glad management let her strike back at the idiot that wrote that hateful e-mail. From my experience in the media here in the Ozarks, if one person sends the station or newspaper an asinine complaint about an on-air person, that on-air person loses their job or gets "reassigned."

Some people are leaving snide remarks on You Tube and Facebook attack Livingston for doing this. These people do not realize the stupid crap that we in the media put up with from some people. She referred to this person as a "bully" and that is as accurate a description of many of these people.

Many people complain about silly things like hearing a commercial too often or the radio station is playing too many African-American artist (Sadly, that is a frequent complaint in the Ozarks and they usually don't use the term "African-American" when they make this complaint). I even worked at a country radio station (Don't hold it against me) where a woman complained that we played too many songs "which portrayed spousal abuse in a negative way" and "took the women's side when the husband is usually the victim." We had to stop playing "Thunder Rolls" by Garth Brooks, "Broken Wings" by Martina McBride and "Goodbye Earl" by the Dixie Chicks. Only in the Ozarks do we giving into the request of the proud mother of a wife beater.

People also don't realize there are people who do nothing but make complaints to the media. These people must have about six TVs tuned to each station and several radios on at all times, so they can hear or see something to complain about. Everyone in the media in this town knows these people, because they have all had to deal with these stupid people. Now these people are even more obnoxious, because they can friend every TV and radio station, every on-air personality or newscaster and attack them when ever they want. They also now have the advantage of suckering in more stupid right-wing, media bashing nut jobs to help them. This, of course, goes along with my last post.

Much of this comes from one simple factor, these people who make these complaints do not think that people in the media are human beings. They would just as soon see us unemployed or dead. Many of these media complainers do this for attention. I doubt these people would want anyone to criticize them at their job, but they see no problem lashing out at those of us in the media.

If the managers of media outlets would ignore these people or allow the on-air talent to address these critics, as Jennifer Livingston so eloquently did, rather than giving in to them, we have less of this hateful bullying toward talented, dedicated people trying to provide people with the information they need. Let's face it, if Ozarkers had their way, all of the highly intelligent journalist would be replaced with Baptist preachers or auctioneers with big cowboy hats.

Of course, opinions, like this one, is why I'm considered the Super Villain of the Ozarks!!! Mwu-HAHAHAHAHAHAHAHAHAHA!!!

VIDEO: WKBT Anchor Jennifer Livingston’s On-Air Response to Viewer Complaint About Her Weight - TVSpy
Posted by Desdinova at 2:06 AM 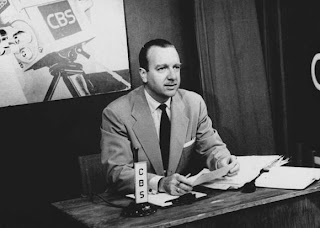 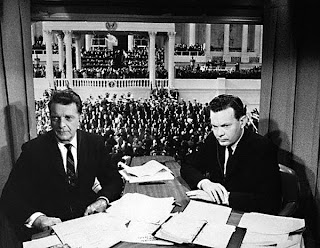 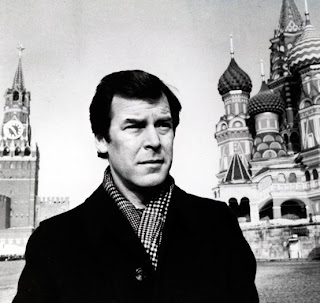 You frequently hear people lament that the news media of today is not as good as the news media of the past. Then again, you hear that about everything. When I entered college as a media major, being in the news media was considered one of the ultimate jobs a person could have. After all, the news media was America's window to the world. If I wanted to I could choose the path to belong to that elite group with such people as Walter Cronkite, Chet Hutley and David Brinkley, and Peter Jennings (All pictured above). I've got a surprising eye opener for you. Watch the evening world news on CBS, NBC and ABC, then watch an old evening world news cast on You Tube from the 60s, 70s or 80s. They haven't changed except for the technology and personalities.

On the other hand watch a clip of CNN from the 80s and then watch a little of it now, you WILL see a big change. Personally, cable news has went down in quality. Also, you would be shocked if you saw Internet news pages of the 90s versus today's.

Let me give you my opinion about what made the men above trusted voices. They were larger than life figures in Washington, DC or New York. When they told you what happened, you accepted it as the truth and didn't argue with them. Now thanks to Facebook, Bubba in Bois D'Arc or NellieBelle in Piedmont, Arkansas can make a snide remark about a story KYTV or KOLR ran on the 6 pm news or bad mouth Brian Williams or Scott Pauly.

I feel the comments on local news stories on Facebook has reached some very dangerous and tacky levels. After a recent tragic accident here in the Ozarks, people began leaving comments accident if the man and woman, who died in the accident were having an extra marital affair. WHAT DOES THAT MATTER? WHY WOULD PEOPLE BRING UP THAT AT SUCH A DELICATE TIME?

Another problem is how Internet news like Yahoo and MSN is driven not by importance, but what people have shared, searched or read. Never mind important world news or national news, Yahoo and MSN is going to give you headlines on Anne Hathway's ugly dress or a video of cute kittens on You Tube.

Let me also add that it is either time to do away with Letters to the Editor in newspapers or make stricter rules on what letters get printed. Some local newspapers run letters from the same idiots week after week and day after day. I was recently looking at some back issues of the Springfield News Leader and discovered that many of the crazy right-wing letters in the 80s and 90s were from the same people EVERYDAY. Many of these were stupid too. Case in point: Ron Davis in his Chatter column (which was hated by these idiot NL letter writers) had said that he wished Guns N Roses would perform in Branson. Several brain damaged individuals didn't want Guns N Roses in Branson, because they considered them "vulgar" and "untalented." You know who else they didn't want to come to Branson? ANDY WILLIAMS. Yes, the Letters to the Editor section in the Springfield News Leader was once filled with hateful letters from Ozarkers who didn't want Andy Willaims to bring his "Hollywood values" and "Las Vegas values" to "ruin" the Ozarks. This was after he had told some an interviewer that some of the Branson shows were crappy.

The one thing I have learned from working in the media is that the majority of people think you do a great job but never tell you. The people who constantly criticize the media are insanely jealous of media people because they chose a bad career, like real estate or auctioneering.

Of course, opinions like these are why I'm considered the Super Villain of the Ozarks!!! Mwu-HAHAHAHAHAHAHAHAHAHA!!!
Posted by Desdinova at 9:09 PM