Let's Bring Back the Studio 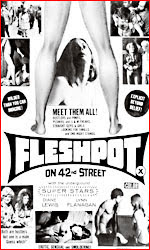 I remember in my younger days seeing ads in the Springfield News Leader and Daily News for the Studio. Only recently did I find out what this place was called and where it was (3838 S. Campbell - there is a Panera Bread there now), but I remember the ads fascinated me as a child. The reason: all those X's. I specifically remember a film called Pussy In Boots having four Xs.
That is why I feel it is my duty to remind Springfield and educate the younger people of the existence of such a place. I hope to in coming (NO PUN INTENDED - STOP THAT SNICKERING!) weeks to upload some ads from the old News Leaders and Daily News. I'm also launching a campaign to bring back the Studio. I just feel there should be a family friendly porno theater in this town again.
Posted by Desdinova at 1:09 AM

Maybe I should have posted this first. I feel that in this day of silly disclaimers ('Please do not put child in dish washer' or 'Toliet seat should not be used as a flotation device') I should have one too. There are some very letigious individuals out in our world.

I am not a real super-villain. I don’t really have a death ray or the ability to throw balls of lightning. I’m not trying to take over the world and enslave people. So don't report me to Homeland Security or Springfield PD. You'd end up looking like an idiot.

I’m just a regular guy with an off beat sense of humor, off beat taste in music and (according to some) off beat political views. I’m really a nice guy if you know me. Very little of what you should read here should be taken seriously. I just like to make jokes about things going on and the folly of others. It is like Oscar Wilde said, "Life is too important to be taken seriously." Ozarks tend to be upset about the wrong things.

A few years back a Southern Baptist minister came to the community I grew up. He worked to get the local cable company to drop MTV, tried to get the local newspaper cartoonist fired over a cartoon showing the Southern Baptist lynching Mickey Mouse, and trying to keep grocery stores and restaurants from selling liquor. While all of this was going on there were several unsolved murders, spouse and child abuse increased, hate groups and meth dealers moved in. Eventually people woke up and said, "What happened to our community?" Well, they ignored the real problems while getting upset about things that really didn’t matter.

Getting mad at me won’t do any good. Making a fuss over something I said would be silly, because I’m just being silly myself. Just relax, read and enjoy.

As Red Skelton used to say, "It’s a lot of fun to try and make people laugh because regardless of what your heartache might have been, while laughing for a few seconds you have forgotten about it. I personally believe that each and every one of us put here for a purpose and that is to build and not to destroy. And if by chance someday you’re not feeling well, you should remember some silly little thing that I’ve said or done and it brings back a smile to your face and a chuckle to your heart, then my purpose as your clown has been fulfilled." (Aren't you glad I didn't quote that highly overated record he made about the Pledge of
Allegiance.)
Posted by Desdinova at 8:14 PM

Greetings! I am Desdinova the Eternal Light and I bid you welcome. I have decided to create my own blog for several reasons. I usually post on the Missouri Radio Forums, but that message board mysteriously disappeared a few weeks back (oddly enough I had nothing to do with that or the ice storm and power outages – my freeze ray and blackout bomb isn’t working). That board has really gotten bad lately since they started censoring some of the post, but it is a useful diagnostic tool in determining why radio in this market is soooooo boring. I also make comments on some of the local blog comment pages.

I have become quite popular. When people find out my true identity, they say, "Hey, everyone in the newsroom thinks you are great." (I’m quite popular among what I call the REAL MEDIA) I was at the mall one day and saw a Goth/punk boy with my famous ‘catchphrase’ scrawled in Magic Marker on at T-shirt. I’m so proud of that. I’m an underground sensation with the youth of Springfield already.

My hope is to show the youth what Springburg was like when I first came here in the fall of 1987. You could do pretty much anything. Radio was fun. There were not as many stations but they were all trying to compete with each other and having fun at it. I came here to MSU (when it was SMSU) because on my way to school I would flip back and forth between Dr. Don on KWTO-FM and Woody Snow on KXUS-FM and think "That is what I want to do." KWTO-FM ran a program every called Friday Free Ride.

Unfortunately, things in Springburg took at turn for the worse when a crazy state rep through a hissy fit over the SMSU theater department’s production of the Larry Kramer play The Normal Heart. From that point on, many in the local media became afraid of their own shadow. You frequently hear people say, "Oh we can’t do that here in the Ozarks" or "We can do that it would upset the Ozarkers."

First of all, who are these "Ozarkers" we are so afraid of – a creepy Lovecraftian cult or a cabal of cranky fundies, Republicans, rednecks, old people and other riff raff. Second of all, THAT IS WHY I GOT INTO THE INDUSTRY – TO UPSET THE PEOPLE MENTIONED ABOVE.

Then came the big mistake the radio industry made on a national scale. I was a media major at the SMSU. There was a buzz in Rolling Stone and other music magazines about the ‘college radio’ scene. It was believed that college DJs would revolutionize the industry by playing new alternative, artist, mixed with older artist and some mainstream hits in a freeform style. One of the instructors played our class some tapes of these stations and we liked it. We felt good about being in radio.

Then the teacher played a tape of a new syndicated show that was becoming very popular in some of the major markets. It was the worse thing I ever heard. It sounded like a bad Southern Baptist preacher blabbing about ‘feminist Nazis’ and ‘tree hugger.’ We all said to each other, "Who would listen to this crap?"
The radio industry decided that radio listeners wanted and they put all their resources into making Rush Limbaugh and his nasty little talk radio buddies the main focus of the industry. They allowed consultants and others to alternative rock stations into another highly structured format.

This area of course has become obsessed with talk. They think that every rock station should be changed to talk. When I was a kid, every time I found a station that played the music I liked, someone would buy it and change it to country.

When the radio industry put all of its eggs into the talk radio basket, they started driving away the youth audience. Radio drove its geese to a poor market with talk radio.

Also I’m finding out that the industry in this area wants to be boring. I have produced spots for local radio and been called on the carpet (by cranky listeners and people who work in the industry) for putting music in spots and sound effects. Apparently that ‘bothers’ listeners. I SAY TOUGH DARTS. I PLAN TO PUT GUN SHOTS, SIRENS, CAR ALARMS, EXPLOSIONS, SCREAMING WOMEN, FINGER NAILS ON CHALK BOARD ON THE RADIO AND NONE OF YOU WILL STOP ME!!!

That is why I am here. To make mischief and break the rules of what I call "Ozark Correctness." I hope you enjoy this blog. I have some surprises for everyone AND NONE OF YOU WILL STOP ME!!!!
Mwuh- HA HA HA-HO-HO-HO-HA-HA-HA!!!
Posted by Desdinova at 5:48 PM