A QUICK THOUGHT ON THANKSGIVING

On this Thanksgiving Day, I want to get something off my chest. The one thing I never liked about Thanksgiving was the emphasis on the pilgrims. I didn't want to study about the pilgrims, because they were boring and dull. The pilgrims were always presented as so-hollier-than-thou people that we could never measure up to. However, in a college course I had to read pilgrim diaries. These were not only boring, but the pilgrims spent most of their time having sex. The pilgrims have to be the most overrated group in history, next to the dorky founding fathers. Of course, opinions like this are why I'm considered the Super-Villain of the Ozarks!!! Mwu-HAHAHAHAHAHAHA!!!
Posted by Desdinova at 10:35 AM

THE SONG "SOCIETY'S CHILD" ISN'T ABOUT ME 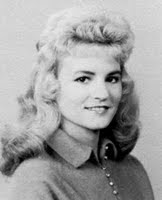 I first heard the song "Society's Child" by Janis Ian when I was in junior high in Lebanon, MO. It was on an Kansas AM oldies station late one night (this was in the early 80's).
At the time I was infatuated with Eunice Moneymaker (pictured above) and several other of her cheerleader friends. Everyone from the redneck rubes in class to teachers and other adults told me I couldn't go steady with a cheerleader since I wasn't a jock. They would get very angry at me when I said it shouldn't matter that I wasn't a jock and should be allowed to have a cheerleader as a girlfriend. Apparently this is some big important law on the books in either the city of Lebanon and Laclede County as much hatred as was directed at me for wanting to break the "cheerleaders-only-go-with-jocks-law." If this is a law I'm going to ask both Lebanon Mayor C.P. Craig and President Obama to create a law to force cheerleaders to date at least one nerd a month.
I heard this song and thought this was about how Eunice wasn't (and the other cheerleaders) allowed to go steady with me because I wasn't a jock.
I've since found out I was wrong about the song. It is about a white girl not being allowed to date a black boy.
However, I'm pretty certain that the songs "Seven Year Ache" by Roseanne Cash and "You're So Vain" by Carly Simon are about me.
I should say that Eunice's mother, Kay, is a very nice lady and had no problems with me being in love with her daughter. It was Eunice had a problem with me being in love with her. If you see Kay, tell her Sherman Muckenfuss says hello (Yes, my real name is Sheman Muckenfuss - At least it ain't Shottenkirk).
Here is Janis Ian singing that song on the Smothers Brother Comedy Hour in 1967.

Posted by Desdinova at 1:25 AM

A little video from You Tube:
﻿

Posted using ShareThis
Posted by Desdinova at 2:16 AM

OZARKERS WERE AFRAID OF VIRGINIA WOOLF BUT NOT FASTER PUSSYCAT 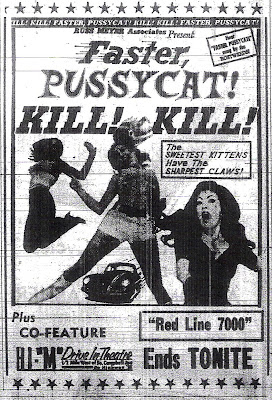 While looking through some Springfield News Leaders from 1966, I found an ad for the Hi-M Drive-In. They were showing Russ Meyer's Faster, Pussycat! Kill! Kill! The interesting part is that this same week another theater in town was showing Who's Afraid of Virginia Woolf? Oddly enough, there was a noted trouble making preacher leading a crusade against of the Burton/Taylor film. The LTTE were saying the film was filled with "vulgar talk" and "excessive use of liquor." Oooooooohhhhhh! That is scary. They ignored the film where Tura Satana backed over a guy's crotch. It also came with a disclaimer at the beginning of the film.
The more things change the more they stay the same. The good thing is the News Leader only ran letters to the editor on Sunday instead of every day. It would cut down on the overabundance of letters from right-wing nutjobs, but of course, opinions like this are why I'm considered the Super Villain of the Ozarks!!! Mwu-HAHAHAHAHAHAHAHAHAHAHA!!!
Posted by Desdinova at 1:05 AM