Happy Holidays or Sit and Spin!

If you say "Happy Holidays" to someone and they give you some big lecture on the "culture war" or "war on Christmas," do what I plan to do.

GIVE THEM THE FINGER AND SAY "I WAS ONLY BEING NICE! I DON'T REALLY WANT YOU TO HAVE A NICE HOLIDAY! SIT AND SPIN!"
Posted by Desdinova at 7:15 AM

Quiet Riot, Eunice Moneymaker, the University and the Downfall of Good Radio 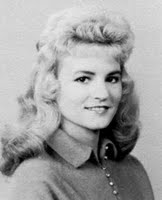 Earlier this week, the lead singer of the 80's heavy metal band Quiet Riot, Kevin DuBrow, died. It got me think about what made me become a SUPER-VILLAIN OF THE OZARKS.
The picture above is of Eunice Moneymaker (not her real name, but my name isn't Desdinova either). I met her in seventh grade and she ruined my life. Let's just say that young Desdinova tried to do anything to make her fall in love with him. She was quite popular and often interviewed by the school newspaper. She mentioned that her favorite pasttime was "listening to the radio."
At that point, I decided "If I get into radio, she will fall in love with me." In these ponderous articles (yes, even junior high journalism can be ponderous) she would give the name of her favorite song. Once she said it was "Cum On Feel the Noize" by Quiet Riot. It just so happened that was my favorite song. I had something in common with Eunice. I soon found out Eunice was one of these people who only liked a new song for a few weeks and moved on to the next flavor of the month. Also Eunice had this horrible little friend named Lillith Vore. Lillith said that if you turned the song up to full blast DuBrow was singing something dirty. Of course, Lillith prefered Barry Manilow.
Also the station in our hometown, KLWT-FM 92, played the single version of the song which was shorter. The rest of the time they played Barry Manilow, Dan Foggleberg and Air Supply. UGH! I thought "When I program radio that stuff will be gone. It will be all Quiet Riot, Motley Crue, Ratt, Ozzy, BOC, Van Halen, Sex Pistols and Zappa. NOTHING WILL STOP ME! Mwu-HAHAHAHAHAHAHA!"
I went off to Southwest Missouri State University and obtained a degree in electronic media. I was told by the instructors there that I had a great future in radio. Sadly, the radio industry began taking a turn for the worst.
The industry now believes that radio should not be programed for the listener, but for the advertiser. For some reason the "good" music (The lame stuff I hate) must be separated from the "Bad music advertisers don't like" (the stuff I love). Put the "bad music" on a weak signal so nobody can hear it and don't promote it.
There is WAY TOO MUCH country music and talk out there on the radio. Talk is the worst. Besides the fact that the majoroity of corporate radio companies seem uninterested in programing anything that would be of interest to anyone under 40, or at least a REAL person under 40 as opposed to a mythical version of what they THINK a person under 40 is like (there idea of a woman under 40 is something akin to June Cleaver than the women I know under 40).
Jones Media has now unleased the most misguided format idea yet and, unfortunatly, the company I work for picked up on it: Timeless love songs. Crappy, mushy, slow wimp music and announcers must read liners rather than be good ole fashioned on-air personalities.
I feel the reason younger listeners are going to Ipods and sateilite services is because not only are they not hearing the music they want, but they don't trust the industry. Everyone who reads this blog knows I HATE TALK RADIO with a passion.
The two talk bozos in town (KSGF's Vincent David John Jacob Jingle Himerschmit Rufus Xavier Sarsaparilla (who found a kangaroo) Shimmy Shimmy Ko-ko Bop Ramma Lama Ding Dong Do Wah Diddy Diddy Da Do Ron Ron Ron Da Do Ron Ron Gidyup Ooomp Pompa Oooomp Pompa Mow Mow Hiyo Silver Away Banana Fanna Fo Fanna De Doo Doo Doo De Da Da Da (That's all I want to say to you)Gabba Gabba Hey Gabba Hey (Now you're one of us) two all-beef patties special sauce lettuce cheese pickles onion on a sesame seed bun, Itsy Bittsy Tiny Weeny Yellow Polka Dot Joiner-Kersee Sammy Davis Junior Jericho and KWTO-AM's new boy, Chubby Buffoon) are showing just how much they HATE KIDS AND THEIR CULTURE.
Popcicle Boy has been ranting and raving how you shouldn't let you kids play the Warcraft or let your kids see the movies Golden Compass. Chubby Buffoon said that parents who allow their kids to listen to hip-hop are "garbage."
I believe any parent who doesn't allow their kids to play Warcraft, watch the Golden Compass or listen to hip-hop SHOULD BE TURNED INTO TO D.F.S AS ABUSIVE PARENTS. PARENTS LIKE THAT ARE NO BETTER THAN THE JERKS THAT KILLED ROWAN FORD!
Now some of you are saying, "Des, doesn't that Chubby guy work at the same station as you?" Unfortunatly yes. I can't believe he is allowed to come in a breath that same air and walk on the same floor as me, but some people like him better than me. These are middle-aged white sales guys who have no taste in music. They love guys like Chubby and Popcicle Boy (and Rush, Hannity and others talk radio scumbags).
Chubby has it in for the University that gave Desdinova TWO DEGREES. I snooped in his mailbox (I thought I would see a love letter from the middle-aged white sales guys) and saw an e-mail from a typical right-wing nutcase Ozarker saying that MSU "forced a girl to have lesbian sex in front of class as a punishment." First of all, the girl was accused of homophobia, so the punishment would fit the crime. Also, as a former student, a little lesbian action in front of class would be nice. I think that would be a good use of our taxpayer money.
I'm really thinking I may go back to MSU, it sounds more sane than radio. Eunice Moneymaker, this is all your fault!
Posted by Desdinova at 3:28 AM

My inspiration is a pirate

As some of you realize, I'm not one of those serious bloggers. I use an "alias" and claim to be a super villain. Some would ask what my inspiration was to start this blog. The Best Page In the Universe, which is ran by a pirate named Maddox. I don't agree with everything he has written, but, like my blog, it is probably not supposed to be taken seriously. This is my favorite post by Maddox.
Posted by Desdinova at 2:13 AM