The Greatest Radio Broadcast Ever Was 70 Years Ago 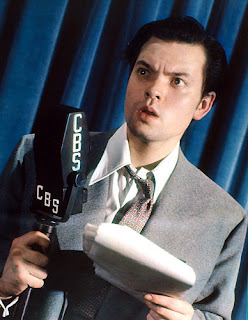 I'm actually a day behind with this, but it is something that has always intrigued me - The Mercury Theater version of War of the Worlds. Here is an article from the New York Daily News. Did this really panic the East Coast or was this blown out of proportion by newspapers competing against radio? Was it Nelson Eddy singing on the Chase & Sandborn Hour that caused people to change the station and miss the opening disclaimer? Why do some people condemn Orson Welles for this, yet think talk radio is a great thing?
Posted by Desdinova at 9:07 PM 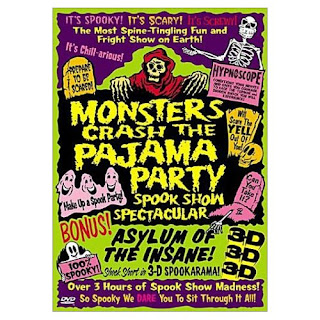 Many people who are too old to trick or treat (or go on a pub crawl) like to rent or purchase horror movies to watch. Granted many popular websites and magazines have "Scariest of All-Time" list, but most of those are films made during the last four decades. Some lazy people give you films made only since 2000. I'm going to give you different choices.
Traditional: The Universal monsters are always good for Halloween. That includes these set featuring Frankenstein, Dracula and the Wolfman. Add to that the Hollywood's Legends of Horror Collection, which included Bela Lugosi and a proto-Goth Chick in Mark of the Vampire, Boris Karloff as politically incorrect villain Fu Manchu, the early color film Doctor X and it's boring sequel staring Humphrey Bogart, Mad Love with Peter Lorre as a Stewie Griffin prototype and Devil Doll with Lionel Barrymore as a Mrs. Doubtfire prototype. Also try out Frederic March's version of Dr. Jekyll and Mr. Hyde.
A Ton of Fun for a Good Price: Check out Mill Creek's Horror Classics 50 Movie Pack. Some great stuff and a few clinkers, but for under $20 bucks in most stores.
For kids: Try to find Mad Monster Party featuring the voices of Boris Karloff, Phyllis Diller and Gale Garnett. There is also the 70's Saturday morning cartoon the Groovie Ghoulies.
Ultimate pick: It's a DVD (pic above) put out a few year ago by Something Weird called Monsters Crash the Pajama Party (Spook Show Spectacular). The title movie is a hokey beach party thing with guys in gorilla suits running around, however if you can maneuver the tricky menu on this you will find several things including Bert I. Gordon's Tormented (a psychological ghost thriller), an anti-cable TV ad using art work from Famous Monsters magazine, monsters movies made by kids from the 20's and 30's (seriously these are good), monstrous musical numbers from the Big Band era (one features a dancing skeleton puppet) and a goofy 50s educational film called Don't Be Afraid of the Dark (the sequel was called Don't Wet the Bed).
Bad Cinema at It's Finest: Andy Milligan's 1970 Vampire film the Body Beneath. Filmed in Highgate Cemetery (fooled some Brits who thought vampires were in Highgate) with red-headed-green vampire women in prom dresses, a hippie hunchback is set on fire and nailed to a church door, a maid has her eyes poked out with knitting needles and the fat ghost of Queen Victoria spouts anti-American sentiments. Here is the trailer to get you interested.

HAVE A HAPPY AND SAFE HALLOWEEN!

Posted by Desdinova at 7:32 AM 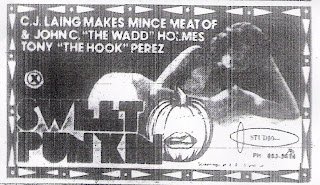 This is from an October 1978 Springfield News Leader. Another ad for the Studio. This holiday classic stars John "Wadd" Holmes.

I also think the flags should be at half staff for Gerard Damiano, the pioneering adult film director of Deep Throat, who died this week at age 80. If it wasn't for him Mark Felt couldn't have brought down Tricky Dicky. CNN has Damiano's obit.

Posted by Desdinova at 2:57 AM

Last Halloween, I posted a list of my Top 50 favorite songs for Halloween. I have had more hits on that post than any other. I've decided to post that list of songs again.
These songs are not in order:

I recently found another Halloween song. This is a German-made early disco song called "Soul Dracula." It was a big hit in Europe in 1975, which many people agree was the begining of the Disco Era. This should have been the nail in disco's coffin or stake in it's heart. I'm giving you this performance from a French TV variety show, because it has a cool looking Count Dracula, sexy dancing girls and a man in the audience with a dog puppet.

Posted by Desdinova at 3:30 AM

It is the kind of stuff they make bad teen movies about. WLNS TV in Lansing, Michigan has the story of a poor guy looking for oral sex at the car wash. Sadly, he was arrested.

"Police say a Michigan man has been arrested after "receiving sexual favors from a vacuum" at a car wash." A resident called the police and the man was arrested by a police office who approached on foot. The poor dope couldn't get away because he was being held in place by the suction.

His name was released because people would laugh at him for getting it on with a car wash vacuum. I wonder if he was going spray himself with the scent machine.
Posted by Desdinova at 4:34 AM

He was the arranger for such Big Bands as Count Basie, Woody Herman and Harry James. He worked with Frank Sinatra, but he will be remembered for writing one of the greatest TV theme songs of all time. Neal Hefti, who wrote the theme song for the TV show Batman, has died at age 85 (according to AP).

He said it was the hardest writing job he was ever given, although it has the easiest lyrics to remember. It provided Hefti with his only Top 40 hit and was covered by such artist as Harry James, Nelson Riddle (who scored the TV show and 1966 movie), the Who, the Kinks, Jan and Dean, Link Wray, the Ventures and the Jam.

Hefti was also the writer of the Odd Couple theme song.
Posted by Desdinova at 2:59 AM

Are These The Ugly Ozarks Twins You Are Looking For? 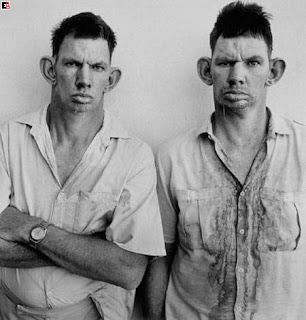 The Feedjit has seem several hits to this website from Great Brittan for "ugly Ozarks twins" or "ugly twins of the Ozarks." I hope this is what you British folks are looking for. These guys were last seen putting up this billboard in West Plains.
Posted by Desdinova at 5:14 AM