25 Songs that Make Me Feel Good, But Suggest I'm Too Hostile for Radio

I always fall into these traps. I was asked by someone at work for a supposed "fun thing" to list 25 songs that make feel good. This co-worker said the song should be "something that can bring you out of a bad mood or put you in a positive mood." Here is the 25 songs I wrote down (with links to You Tube vids of the songs):
What I didn't know was this stuff was going to be given to the format consultant, as suggestions for possible addition to the stations playlist. The consultant has branded me "too hostile for radio." This guy feels that the station should attract a women between the ages of 25 - 60, non-smokers, who drive Volvos and won't let their children watch SpongeBob Square Pants or Thomas the Tank Engine because of the "excessive violence." These women our radio station is supposed to target also have All-Bran and prune juice for breakfast and wear white cotton panties. I might frighten these women.
My question is "What would be wrong with frightening those women?" Mwu-HAHAHAHAHA! I think they would deserve it.
Also I was told by a male co-work that he thought I was a danger to the company because of my hostile music choices. He also doesn't like my blog. He is a really square white guy, who likes talk radio.
Now, my question is how are my music suggestion anymore hostile than the stuff collected from the talk goons by Media Matters?
I guess having "hostile" musical taste is just one more thing that makes me Super-Villain of the Ozarks. Mwu-HAHAHAHAHAHAHA!
Posted by Desdinova at 5:15 AM 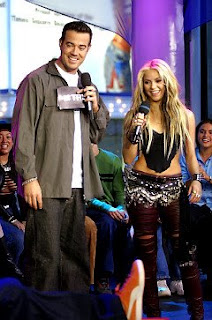 One of my goals when a entered MSU (then SMSU) as an electronic media and broadcasting major was to host a teen music TV show like Dick Clark. I wanted to be that friendly adult the teenagers could trust to introduce them to the cool new music. Sadly, that dream becoming reality is disappearing very quickly.

On Sunday, MTV's TRL will go the way of American Bandstand, the Midnight Special, Solid Gold, Shindig, Hullabaloo, Where the Action Is and others teen music shows. The New York Daily News reports that original host Carson Daly returns for the two hour final show. This also is the end of MTV as a music video outlet, instead turning, like other networks, to cheaply made reality shows. Daly says he hopes it returns soon. Maybe it will or will it be like two of the above mentioned shows and be come a set of DVDs sold on late night TV through Guthie-Renker.
My fear is MTV is may turn from the young pop music fans who made them great and start catering to paranoid, cranky old white men like AM radio did (see story above).
Posted by Desdinova at 9:23 PM

Sorry about getting to this a little late, but I've been busy with other matters. CNN reports the death of Mitch Mitchell, whose fantastic drumming accompanied the great Jimi Hendrix on his first three LPs.

I've always believed that Hendrix was murdered by agents from the Nixon administration, instead of that overdose story.
Posted by Desdinova at 9:07 PM

Ron Davis over at Chatter announced this earlier this week. The Springfield News Leader is raising it's price. My suggestion, if they need to make more money, is charge the letter to the editor writers. I feel that students who write for a class project and liberals SHOULD NOT be charged. Conservatives should be charged by their topic.
I feel that with in a year, Gannett will not have to make budget cuts and we will get the paper for free.
Posted by Desdinova at 5:01 PM