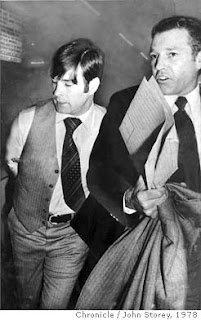 I was glad to see Sean Penn win Best Actor for Milk (although I wanted Brad Pitt to win). I've liked Penn ever since Fast Times at Ridgemont High. I'm interested in seeing the film, although the Harvey Milk story had an ugly effect on my childhood. Nothing to do with the late Mr. Milk, but the guy who killed him, Dan White.
You see, as a child, I didn't eat much. When I entered the seventh grade I weight 95 pounds. I didn't like to eat the stuff my parents ate. I preferred the fun stuff: soda, hot dogs, candy bars, etc., what fascist adults called "junk food." I did finally start eating the "healthy" stuff. Ironically, you don't want to know what I weigh now.
I would get lectured about eating this stuff, especially at Mark Twain Elementary. Mark Twain Elementary was home to Principal Betty Moore and some of the crankiest teachers on the planet. I think they should make laws against public educators being that cranky and evil. One of the things I heard at school and from other evil adults (I don't call these people "well-meaning adults" because any adult against me doing what I wanted to do was, and still is, evil) was "There was a man in California that would only eat Twinkies and Coke. It caused him to go crazy and kill two men he worked with." That may have scared the other kids but it didn't work on Desdinova, because I was smarter than every adult I knew back then (I'm still smarter than most people older than me).
I was going when I set out to write this post I Googled Dan White and found this article from The San Fransisco Chronicle in November of 2003. It talks about how the Myth of the Twinkie Defense as it was called that supposedly got Dan White a reduced sentence. It got me into a trouble but then again that is what makes me SUPER VILLAIN OF THE OZARKS!!! Mwu-HAHAHAHAHA!
Posted by Desdinova at 5:02 AM

Everywhere you go, you hear someone talking about Facebook. Most of what I have heard about Facebook was more positive than about MySpace. Also I was hearing this from people in my age group and older people as well. That should have been a tip off right there as to what it was. Facebook is boring and dull. It is like someone said "How can we make a website like MySpace more like a Polk Directory?"

People on Facebook have to use their real names not fun monikers like on MySpace. I was on there for an hour and didn't see any pictures of drunk, single girls with there skirts stuck in the waistband of their pantyhose dancing on a table.

I believe Facebook was created for people too boring and dull to be on MySpace. It is for overachievers who seem to see everything as a part of their status. There are people on Facebook telling how much money they make, how good their grades were in high school, how much many cars and houses they own, how many kids they have, how many wives and concubines they have. Too many guys who list themselves as Republicans on there.

Granted, unlike MySpace, I didn't find any photos or profile of former male classmates in drag ("Hey, I don't remember this chubby blonde girl in my class - Omigod! That's Tommy Farquar.")

I think I'd rather be on MySpace because it is more like a fun college party and Facebook is like a bad Chamber of Commerce meeting. Of course, opinions like these are what make me the SUPER VILLAIN OF THE OZARKS!!! Mwu-HAHAHAHAHAHA!
Posted by Desdinova at 4:00 AM 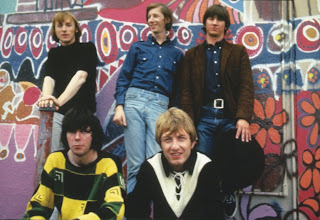 The Los Angeles Times looks back at drummer Dewey Martin of Buffalo Springfield (Front row -right). Personally, I think Dewey is great on "Mr. Soul," "Nowadays Clancy Can't Even Sing" and "Rock and Roll Woman." He is also singing back up on "For What It's Worth."
Posted by Desdinova at 4:18 AM 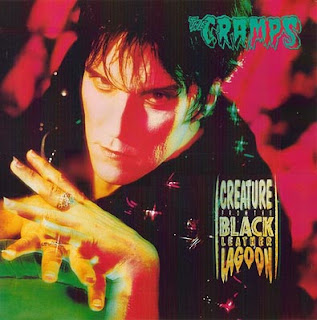 I first heard the Cramps on the Midnite Snack when I was in junior high. Some girl (Wonder who she was? She introduced me to great music) played The Cramps version of "Surfin Bird." I liked the Cramps because of their covers of obscure hits and the cover photos of Poison Ivy.
When I arrived at KSMU to do the Midnite Smack a few years later, I and some of my fellow Midnite Snack announcers thought that eventually we would take over the industry and put the Cramps music into heavy rotation. Unfortunatly, the industry is still run by money-grubbing weasels who seem to think radio should only consist of "family-friendly-timeless-love-songs," country music and Rush and his many wanna-be clones. This is why radio is in such a sad state. Below is a link to the MTV News report.
Cramps Singer Lux Interior Dead At 62 - News Story Music, Celebrity, Artist News MTV News
Posted by Desdinova at 8:19 PM

Tom Brumley, who played steel guitar with Buck Owens' Buckaroos and Rick Nelson's Stone Canyon Band passed away Tuesday in a San Antonio hospital, according to the Houston Chronicle. He had a heart attack a few days before. Tom is the son of Albert E. Brumley, who wrote many famous hymns such as "I'll Fly Away." Both are featured in The Ozarks Greatest Hits book by KTXR's Wayne Glenn. Brumley has family living in the area.
Posted by Desdinova at 8:04 PM

First off I realized there was another ad from last years Super Bowl I found more offensive than the PETA ad that NBC turned down: That stupid puking E-Trade Baby. He is also always on TV while I'm trying to eat. He was back twice this year and even more obnoxious. I can't believe people said they liked those ads.

I notice many people are saying they hated my favorite ad which was from Telaflora. It was the woman who receives the "flowers in the box" that hurl insults at her in front of her co-workers. I think I must be the only one who got the joke. The moral is "Women shouldn't date guys are too cheap to send fresh flowers." We were supposed to sympathize with the woman. Many reviewers thought the advertisers point was "lets make fun of a unattractive woman." It was the opposite, it was making fun penny-pinching jerks who don't appreciate their girlfriends/wives. My favorite line in the ad was when the talking flower told the woman "Nobody wants to see you naked." At the end, a geeky co-worker tried make her feel better by saying he'd like to see her naked, but she didn't want to hear it.

Desdinova's other favorites: Bridgestone ads featuring hip-hop astronauts and Mr. and Mrs. Potato Head, Pepsi's ad with Bob Dylan and Will. I. Am, Denny's poking fun at IHOP's promos and gangster movies, Bud Light's budget meeting and the one with Conan O'Brien, Coke Zero's homage to the 70's Coke ad with Mean Joe Greene, Hulu's ad with Alec Baldwin plotting to take over the world (Alec Baldwin running the world WOULD BE COOL), CareerBuilders with the naked co-worker and the punching of a koala bear.

THE ADS DESDINOVA NEVER WANTS TO SEE AGAIN: E-Trade baby (I can't stress this enough), Cars-dot-com's "David Abernathy" who should have been punched out like the koala in the CareerBuilder ad, Go Daddy (Is there a point to those?), Sobe (WTF?), Castrol (chimps are a Super Bowl ad cliche), Sprint's Roadies and ALL OF THE CAR COMPANY ADS SUCKED BIG TIME (especially that Audi ad)!

AdAge has a page where you can re-watch those the Super Bowl ads.
Posted by Desdinova at 9:01 PM