DREAMS FROM TIME-LIFE OR WHY THIS DECADE SUCKED? 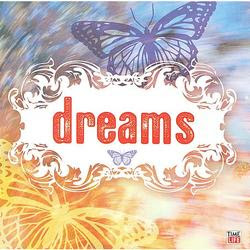 Last night, I saw an ad on a local TV station for a CD from Time-Life Music called "Dreams." I really feel this CD is misnamed. It should be called "Lame - the worst, most overplayed-on-radio songs of the past decade." Any CD with TWO Michael Bolton songs on it is just plain bad. This is the musical equivalent of water boarding. These songs make us appreciate the "sunshine pop" of the 60's and 70's. Of course, opinions like this are why I'm considered the Super Villain of the Ozarks! Mwu-HAHAHAHAHAHAHAHAHAHAHA!!!
Posted by Desdinova at 2:10 AM 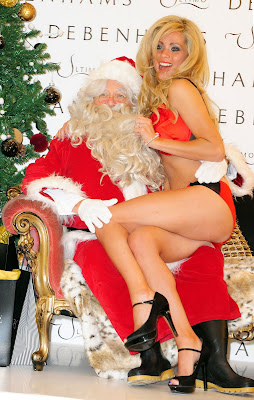 I didn't have time for a great Christmas post of fun stuff like last year. I still want to wish you a merry and blessed Christmas! Enjoy being with your family. Think about the poor and needy, the sick and afflicted, as well as our service people serving abroad. Hopefully they can all be home soon. Most of all remember the reason for this season and message of love and peace that Jesus Christ brought to the word.
My other wish is that Santa brings me what is sitting on his lap in the photo above.
Once again, Merry Christmas from Desdinova the Super Villain of the Ozarks!!! Mwu-HOHOHOHOHOHOHOHOHOHOHOHO!!!
Posted by Desdinova at 6:48 PM

YAHOO NEEDS TO STOP WITH THE FASHION POLICE REPORTS 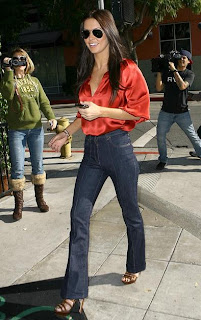 Many times, when I'm at work, I go to Yahoo to see if there is any breaking news from Associated Press or Reuters. They used to be pretty good at displaying the latest news headlines. Lately, Yahoo has been trying to draw attention to OMG, Yahoo's gossip sight which tries to be TMZ, only without the "Let's-hunt-down-and-kill-celebrities" mentality. It tries more to copy Perez Hilton's snippy, caddy comments on celebrities clothing. The difference is Perez is gay guy who is fascinated with celebrities, where as OMG's comments remind us of those cranky, fat, zit-faced girls who had find the least little flaw in the cheerleaders ("Her hair is way too wavy and her butt is round instead of square like mine.") The OMG headlines are just stupid and useless.
I don't care that the folks at OMG think that Nicole Kidman had too much make-up on, Miley Cyrus is dressed like Moms Mabley or Lindsay Lohan has a runner in her hose. They also seem to have a bizarre hatred of high-waisted jeans like the ones Audrina Partridge is wearing in the photo above. I have no problem with this sight being listed as part of Yahoo, but to the OMG headlines have to dominate the Yahoo home page over the national news headlines.
I also think jeans like this are STILL SEXY! Of course, opinions like this are why I'm considered the Super Villain of the Ozarks!!! Mwu-HAHAHAHAHAHAHAHAHA!!!
Posted by Desdinova at 8:01 PM CNN has the story of next years Rock & Roll Hall of Fame inductees. I'm not a person who gets all bent out of shape over who is inducted to the Hall of Fame. However, let me say this is a good group of inductees.

Posted by Desdinova at 9:13 PM 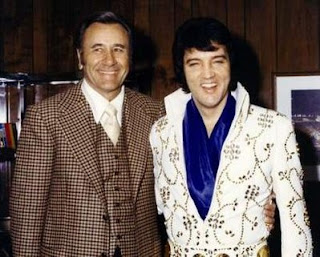 Pioneering televangelist Oral Roberts (He is the one on the left - for you younger folks. The guy on the right is a fellow name Elvis) died at age 91. CNN has his obituary. The title is a reference to a statement he made in late 80's.

"In 1986, Roberts announced that God would "call him home" unless he raised $8 million to send medical missionaries from the center -- an announcement that was widely publicized."

Oral must have missed a payment. I'm kidding. None of you weenie-bloggers better write a post saying I was celebrating his death, because Oral Roberts was one of the few televangelist of that era that I didn't have a problem with.
While he still preached a "prosperity gospel," Roberts tended to be positive and focus on the power of prayer and faith rather than partisan politics and destroying the entertainment industry.

I also remember as a child traveling to Oklahoma in the early 70's (at the height of his popularity) and seeing a large billboard outside Tulsa that advertised the Oral Roberts University. It featured a giant Oral Roberts waving his arms up and down, welcoming folks to Tulsa.

I read a comment, in one of the articles on his death, from an Alburn University professor of religion that Oral Roberts may have had a more positive impact on Christianinty than Jerry Falwell. I agree that, but of course, opinions like this are why I'm considered the Super Villain of the Ozarks!!! Mwu-HAHAHAHAHAHAHAHAHAHAHA!!!

And remember, SOMETHING GOOD IS GOING TO HAPPEN TO YOU!
Posted by Desdinova at 8:12 PM

BUY A DESDINOVA T-SHIRT OR ELSE!!!

In my never ending quest to rule the world, I have created t-shirts for my fans at the Zazzle website. I have a shirts for men, women, children and even babies. Hurry and order them for Christmas! I think everyone would love a Desdinova t-shirt. Of course, opinions like this are why I'm the Super-Villain of the Ozarks!!! Mwu-HAHAHAHAHAHAHAHAHAHAHA!!!
Posted by Desdinova at 2:14 AM 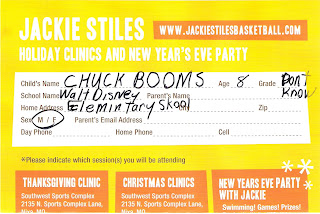 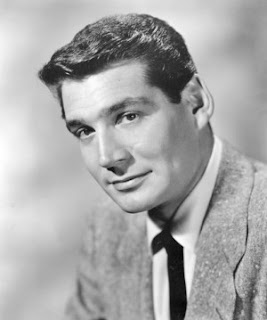 Actor Gene Barry, star of the TV shows Bat Masterson, Burke's Law and The Name of the Game, has died. He was 90. Here is the Los Angeles Times story on his career. Some quick trivia for sci-fi geeks:

Posted by Desdinova at 1:15 AM 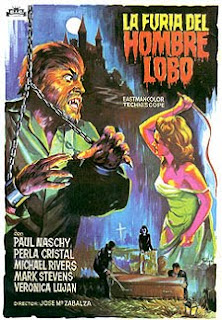 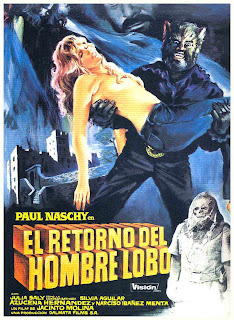 Spanish horror film icon Paul Naschy is dead. The actor best known for playing the werewolf named Waldemar Daninsky had been battle cancer for about a year. Here is an article about his death from Fangoria and his credits from IMDB.
Posted by Desdinova at 3:28 AM

Posted by Desdinova at 2:41 AM

Everybody knows that I find most of the Letters to The Editor in the Springfield News Leader to be the same old garbage day after day. The fact that the News Leader considers right-wing propaganda written by local hillbillies worthy of print bothers me. Not a day goes by without a media bashing letter. Within the last week we saw a return of the "Springfield-needs-to-stand-up-against-sex-in-entertainment" letters that have been a staple of the News Leader since the early 60's crusades against ballet on Ed Sullivan Show, Who's Afraid of Virginia Woolf? and the Normal Heart. Trust me, if any would be O.K. Armstrongs or Jean Dixons spring up, I'll be the first to make fun of them.
With that said, let us look at what will go down as the goofiest Letter to the Editor of the year. It was from Tad Pemberly of Springfield and tackled a serious subject. Apparently, a few days back Garfield said he loved tuna. Tad was upset.
"I find this one word to be the ultimate betrayal to all Garfield fans everywhere. Everyone knows that Garfield loves lasagna, not tuna. The statement that Garfield loves tuna is a slap to the face of all newspaper readers who have enjoyed the rotund tabby cat's 31 years of comic strip hilarity. Furthermore, this strip demonstrates Davis' lack of audience awareness."
Tad goes on to say, " To summarize, Jim Davis needs to put down the pen. This latest strip in a long line of offenses toward his audience is simply too much to bear for one reader. In addition, the comic strip editors of the Springfield News-Leader need to take better care in their reading to ensure the strips printed in their comics section do not offend."
In most areas of the country, this would be seen as a stupid letter. Bad part is this is the Ozarks. There will be about thirty letters that agree with this guy. The News Leader has published many letters from comic strip haters over the years. Dick Tracy and Spiderman were removed from the News Leader and Daily News in the late 70's because of complaints from tight-assed Ozarks parents. Throughout the 80's, the News Leader ran letters from people who hated Doonesbury and the Far Side. Also in the late 80s and 90s there was a crusade from a psycho-idiot (who claimed to live in a dumpster behind the Gene Taylor Main Post Office) to have the funnies removed from the News Leader because "life-is-too-depressing-to-be-enjoying-humor." Boo-hoo, cry me a river.
Reading this letter from Tad Pemberly reminded me the time Steve Allen read a Letter to the Editor of the New York Daily News criticizing artist Zach Mosley's Smiling Jack comic strip for "a lack of realism in dealing with aviation and sex." Allen would usually assign the name of a famous person to the letters he read to make a joke (similar to the e-mails on the Jim Rome Show). Allen said the letter was written by Milton Caniff, the artist behind the rival comic strip "Steve Canyon." Maybe Tad Pemberly is the guy who draws "Heathcliff."
I'm sure within a few days some idiot will write a letter to the editor entitled "Obama Brainwashed Garfield Into Say He Loves Tuna Instead of Lasagna." If I ran the News Leader I would run nationally syndicated liberal columnist instead of letters from crazy Ozarkers. Of course opinions like this are why I'm considered the Super Villain of the Ozarks!!! Mwu-HAHAHAHAHAHAHAHAHAHAHAHA!!!
Posted by Desdinova at 3:00 AM