DESDINOVA & HIS TWIN BROTHER ARE ON THE BEACH 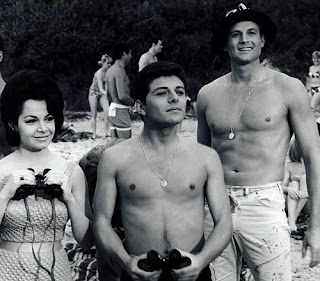 I just wanted you readers to know that I and my "good twin brother" have exiled ourselves to the beach, as they say in the industry.

Also look for a change in this blog. We have been looking at trends in other blogs (such as Retrospace and Neato Coolville), as well as what post on this site have been most popular. We have decided that a change may take place.

There are many great blogs covering local and national news. I can't keep up, so I will be shifting my focus away from that stuff and focusing on entertainment and pop culture. Of course, when a person focuses on pop culture and entertainment, Ozarkers get upset. As you know, I LOVE TO UPSET OZARKERS!
Posted by Desdinova at 2:48 AM

THE REASON A NATIONAL ANTI-BULLYING LAW NEEDS REPARATIONS FOR VICTIMS 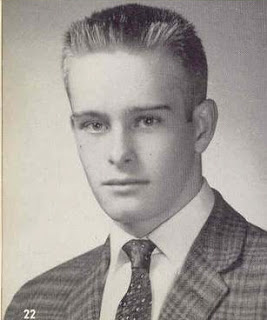 As you know from reading this blog, I believe we need a national law to deal with the bullying problem. In November, I wrote a post about how I feel that there needs to be a strict federal anti-bullying law. This law should also require the bully and his/her family to pay reparations to the victim.

Some people would say, "Desdinova, why would you believe such a thing is necessary?" My reason has a name: Donny Dickweed (pictured above).

Donny was both a jock and a preppy. His grandfather was the president of the local bank and his family owned a company that made recliners and mattresses. Donny picked on both me and my "good twin brother." As a matter of fact, Donny Dickweed is one of the models for the bad guy, Johnny Waldorf, in my "good twin brother's" novel, Real George.

What is Donny Dickweed doing today? I saw his profile on Facebook and he lives in a large beach house in Florida with a hot wife. He is in real estate and is (of course) a Republican. Meanwhile, I live in a small apartment and make minimum wage, even though I have two college degrees and work in the mass media.

I feel every time somebody buys a recline or mattress, I and my "good twin brother" should get at least 75-percent of the profit to make up for all the "heart-checks," "pink bellies" and "Does-this-hurt?" sessions we were forced to endure from this guy. I also want to note that he didn't just pick on me and my "good twin brother" but other students both male and female. I once saw him choke a female student until she nearly passed out. He also called Eunice Moneymaker "zit face" until she cried.

There were very few teachers and administrators who would stand up to this jerk, because his family were very prominant in the community. His grandfather has a monument to dedicated to him or something like that. Donny was allowed to get away with this sort of behavior because of his family's money and power.

If you are wondering, neither I nor my "good twin brother" are friends with Donny Dickweed on Facebook. Eunice Moneymaker is but, as I have pointed out before, Eunice didn't have good taste in men or she would have went steady with me.

The fact is one never forgets the scars left by a bully, however if the bully and his family had to pony up some dough to the victim (75 percent of every recliner and mattress sold), the pain might hurt less.
Posted by Desdinova at 10:13 PM