Smothers Brothers DVD Not Perfect But Well Worth the Money 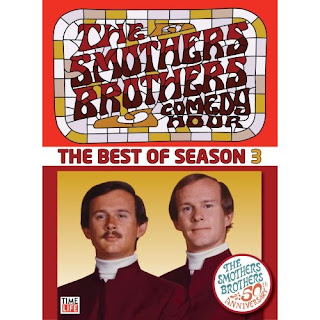 I had mentioned in June that I was looking forward to the upcoming release of the Smothers Brother Comedy Hour on DVD. I purchased it last week and have enjoyed watching these shows from the final season.
The show was pulled from CBS because of the political nature of the show. If you compare these shows to the Laugh-In shows on DVD, you'll wonder if CBS didn't have it in for Tom and Dick or NBC's censors were as dumb as a box of rocks. Also when you find out what was censored you'll shake your head in disbelief. On the other hand, some of the stuff that got by is great. My favorite is a skit invoving the first interacial wedding in the South. After the "I do's," minister ask for "the rope" instead of the ring.
My only problem is this is not the complete third season. Several episodes are missing including two shows featuring the Beatles. Also, one episode had some dialogue in a skit removed by the censors, however it has not replaced. I realize that might be because this was recorded live on video tape.
The forth disk does make up for this stuff with a TV special/mockumentary called "Pat Paulsen For President" narrated by Henry Fonda. For those too young to remember, Pat Paulsen was a comedian on the show who delivered very deadpan "editorials" and later political speeches. The gag was that he was running for president in 1968. He also ran in the years after the show up until his death in 1997. The extras include a performance from the early 1990's at a comedy club in Alaska and extra footage from the TV special featuring Sen. Robert Kennedy and Woody Allen.
Hopefully, the next DVD set will contain some of the missing episodes. However, the DVD set is well worth it. Check it out. It is fun and better for you than watching Faux News.
Posted by Desdinova at 2:57 AM

One is named Thigpen, the other is named Pigpen. Confused?
Posted by Desdinova at 5:44 PM

I wanted to mention the passing of three people: Pink Floyd keyboardist and founding member Richard Wright who passed away Monday at age 65. Here is CNN's obit. One of the classic Pink Floyd songs written by Wright was "The Great Gig In the Sky."

Norman Whitfield, wrote and produced many of the great Motown hits, passed away Wednesday at age 67. Here is a CNN story about Whitfield's career. One was the songs he wrote was "Cloud Nine" by the Temptations.

I wanted to also mention a local passing, Joe McAdoo. He was a Drury University professor. For the past few years he wrote a column for the Springfield Business Journal called "Rusty Saber." Those of us who grew up in the Ozarks, we remember seeing Joe McAdoo on KOZK during the Tele-Auction when he would put on the fireman's hat for the "Firehouse Quickie." Eric Olsen of SBJ wrote this nice piece about "the Rusty Saber."
Posted by Desdinova at 3:08 AM

This is a real ad. Lysol did advertise itself this way. It sounds painful to me.
Posted by Desdinova at 3:43 AM

Russ Meyer Film at the Gilloiz 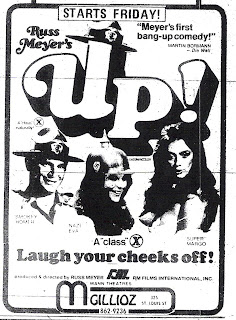 The Russ Meyer film Up! was shown at the Gillioz Theater in April of 1977. How about a Russ Meyer marathon at the newly restored Gillioz?
Posted by Desdinova at 3:38 AM