Day of Silence: Remembering the Cute Teacher and the Crazy Preacher at LHS in the 80s

The Lebanon Daily Record forums have been abuzz with talk about the Gay, Lesbian, Straight Education Network Day of Silence being observed at Lebanon High School. It is a volunteer observation. Students are not forced into observing (personally I thing they should be or face expulsion - but that is me).

The fuss over this reminded me of what happened at LHS in 1986 (maybe 1985).
It involved the young lady pictured above. I won't give her name. It isn't important to the story. She was a teacher. I never had her for class. Too bad, she was HOT! I wish I could have been one of those kids who had sex with a teacher. I'd pick her.


The country was talking about A.I.D.S. Homophobia was rampant among teenage boys. It gave them a certain amount of masculine reinforcement. LHS had (probably still does) quite a few rednecks and jocks. They liked to call those they didn't like "faggot" or "queer."


This young teacher got tired of the some of the guys calling other students these derogatory terms for gay people. She had enough of this and told them her brother was gay. She said she would bring him in an introduce him to show that he was a "real human being."


She took this to the principal, who told her no because he was afraid of possible violence toward her and he brother. That should have been the end of it.


Not long after, a local preacher, who was a known trouble maker, shows up asking why the school was going to allow gay men to "make love in front of the students." Some way this had become a crazy rumor spread around the school. I might add the preacher had NO children in the school and was known to cause trouble with the school over silly rumors. He claimed once that there was an arcade in Lebanon where teenagers were dancing naked and drinking. Needless to say it closed soon after. Worst of all, this preacher had a radio show on KLWT every morning. He bashed everyone from Ozzy Osbourne to Jane Fonda, who he called a "harlot." If I had been running KLWT, I WOULD HAVE TAKEN HIM OFF THE AIR. Unfortunately, I was a junior in high school at the time (Sadly, I have a degree in media from MSU and I'm still not allowed to make programming decisions in radio).


The teacher left Lebanon after just one year, but the preacher had to leave town too. He was caught having an affair with another woman. He now lives in Springfield. He writes bad Letters to the Editor in the News Leader and has been heard on one of the local talk radio shows (Guess who?). He is also involved with local politics (Republican, of course).

Posted by Desdinova at 4:33 AM 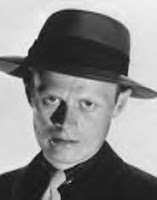 Richard Widmark died Wednesday at age 93. He first became famous as crazy laughing killer Tommy Udo in the 1947 film Kiss of Death. It was his maniacal giggle that Frank Gorshin imitated in his portrayal of the Riddler on Batman.

I always liked the Tommy Udo character because he rolled that wheelchair-bound old lady down the stairs. For more on Widmark, here is the CNN story.
Posted by Desdinova at 3:58 AM

You Wanted to See a Photo of Villanova

I mentioned her in this post about March Madness. Here is what my sister, Villanova, looks like.
Posted by Desdinova at 4:17 PM

I Think the Dark Knight Will Suck

I'm sorry but I just have to say this at the risk of being called "old school," but from what I can tell this new Batman movie, The Dark Knight, is going to suck.

I know the extreme comic book nerds hate me because I prefer the 60s TV show because it had that subversive humor I enjoy. Also I never liked Frank Miller's The Dark Knight Returns. It looked like he drew it on a school bus traveling down a bumpy country road.

What I don't like so far about the new movie is the Joker's makeup. It looks like he put it on while riding in a school bus traveling down a bumpy country road. Too bad Heath Ledger's last great role will be as the Joker with the worst makeup job. According to this CNN report, the Joker IS wearing makeup. In the comic books and the 1989 movie, the Joker's weird look came about because of chemical dye (In the movie, he falls in to a vat and in the comic book he jumped in to escape police capture).

Also notice the dark look of the photos. I'm a little sick of the "Batman-lives-in-a-dark-world" concept. The TV show was overly bright and colorful because the TV networks were trying to sell color TV (I believe RCA dealers gave away Batman mask to kids whose parents bought a new color set). However, I believe if you are going to make a movie, the audience should be able to see what's going on.

I've not seen Batman Begins yet, so I guess before I see the Dark Knight I will have to see it. I don't know. I just think it looks bad.
Posted by Desdinova at 2:10 AM

Yes, I will attract a whole new group of haters and enemies, but I need to say this: I HATE MARCH MADNESS!
Working as I have for the past few years in sports talk radio (I'm being held against my will - a prison sentence for being my "super-villainy"), I absolutely hate this month.
If I think of any more reasons to hate March Madness, I'll come up with them.
Posted by Desdinova at 9:57 PM

A Bus Accident for Bus Plunge 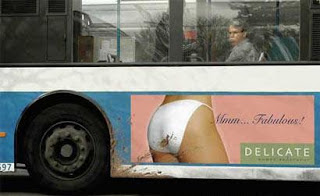 Well, it looks like an accident.
Posted by Desdinova at 4:30 AM

My weird schedule has only allowed me to attend the Springfield blogger events. I made it a point to attend the send off for Tony Messenger of the News Leader. I had fun in the short time I was there (I had to be at work, as usual). It is always fun to talk with the people in the industry who cover the news and deal with the craziness of the business.

Tony was forthcoming about the behind the page world of the News Leader. It is always interesting to learn you don't work at the only crazy place in the business.

I found out that Tony still has the Pez Dispenser I sent him. I also found out I was apparently not the target of the editorials on anonymous blogging. After all, he was glad to meet me. I was a decent person and shook hands with (unlike some of the riff-raff in our community).

I realize not everyone in the area likes Tony (I think we can think of one person), but I believe the editorial page has been better under his direction. Before Tony it was only the Ozarkers who were against anyone having any kind of fun (sex in particular).

Also for those who complain about the News Leader, go to the Library Center and look at the old Springfield Daily News and the old News Leaders from the 1950s. The Daily News front page was mainly wire stories of the most lurid nature. I found one which featured a story about a 19 year old boy who dug up the body of a nine year old girl who had died of cancer for sexual purposes. What did this have to do with folks in Springfield? The News Leaders seemed to be filled with opinon pieces "longing for the good old days when Ma made my sister panties out of Pa's chew tobacky pouches."

I realize Tony stepped on some toes. Some will take credit for him leaving. Really sad that some would have such blind hatred and lack of respect for someone more talented than them, but that is what we in the business have to put up with. Good luck, Tony. Don't eat too much of that Pez.

*Note: No tennis balls were thrown at Tony or anyone else during this blogger get-together.
Posted by Desdinova at 10:27 PM 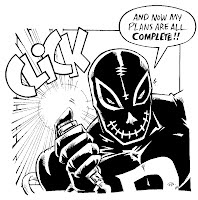 Reader Phil Morrissey sent me this comic panel. Cool, huh! Better art work than the last comic panel that appeared here.
Posted by Desdinova at 1:22 AM

The man who engineered the Beatles early LP, produced the early LPs of Pink Floyd and even had a brief singing career has died. Norman "Hurricane" Smith has died at age 85.

According to All Access: "Smith was the engineer on all of the recordings by THE BEATLES up until 1965 when EMI promoted him from engineer to producer. The last BEATLES album he recorded was "Rubber Soul." SMITH engineered the sound for approximately 180 Beatles songs in all. In 1972, SMITH, using his recording artist pseudonym of "HURRICANE SMITH," had a transatlantic hit with "Oh Babe What Would You Say?."

Smith's 1920's style hit went Top Five in America, while one of his productions "Money" by Pink Floyd couldn't crack the Top 10. "Money" wasn't that airplay friendly with the term "Bulls**t" being used. Still when you hear Smith sing you have to wonder how that became a hit. It may have been "radio friendly" but not "ear friendly."
Posted by Desdinova at 10:25 PM