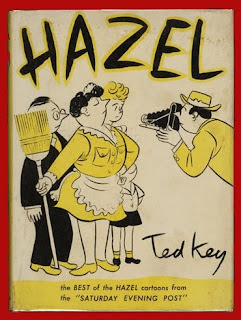 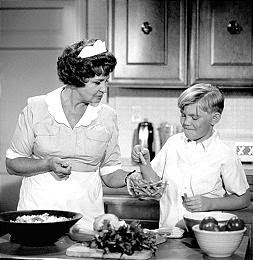 Associated Press is reporting the death of cartoonist Ted Key. Key was 95.
Here is part of the story : "Hazel" was a popular feature in The Saturday Evening Post from the time it debuted in 1943. It evolved into a prime-time series in 1961 that starred Shirley Booth and ran for four years on NBC and one year on CBS.
Key also created the characters Mr. Peabody and Sherman for producer Jay Ward. The time-traveling dog/scientist and his boy made their TV debuts in 1959 in segments on the animated show "Rocky and His Friends."
In 1969, Key acquired the rights to his character from SEP. Since then it has been syndicated to newspapers by King Features. Key retired in 1993.
I had several books when I was a little super-villain that were illustrated by Mr. Key. I believe one involved a caveman sitting on a dinosaur egg.
Mel Brooks once said if Hazel was his maid, he'd half to kill her. Hazel would say, "Sure Mr. B!"
Posted by Desdinova at 8:52 PM