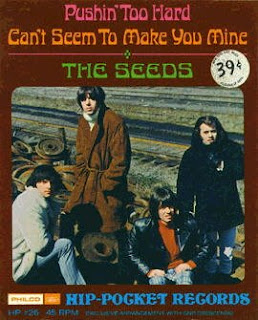 Contrary to popular belief, these celebrity deaths are in fours. There is the first one, an older star who comes a day before the others (Ed McMahon). The next day comes the celebrity we knew was bad sick (Farah Fawcett) and then the third is always the one that hits you like a ton of bricks because you didn't see it coming (Michael Jackson - past examples were Jim Henson and John Ritter). The forth is that person that was more of a cult figure in some circle or a person that makes you say "Oh yeah, I forgot about him/her." Usually, you find out about this one a week or month later. I thought I would tell you about Sky Saxon of the Seeds now.
I mention Sky because of his influence on heavy metal and punk. As lead singer of the Seeds, the American answer to the Rolling Stones, he paved the way for the snotty sounding vocals of the Sex Pistols' Johnny Rotten and Ratt's Stephen Piercy. Their biggest hit was "Pushin Too Hard," which seemed to be only two chords played over and over, was a staple on oldies and classic rock stations until the 90's. Oldies stations felt it wasn't "good time oldies" and classic rock felt it "doesn't rock hard enough - it belongs on a wimpy oldies station." Last year, the Seeds hit "Can't Seem To Make You Mine" was used in an Axe deodorant commercial
Here is the obit from the Boston Hearld: Sky Sunlight Saxon of 60s band the Seeds dies
Shared via AddThis
Posted by Desdinova at 8:37 PM