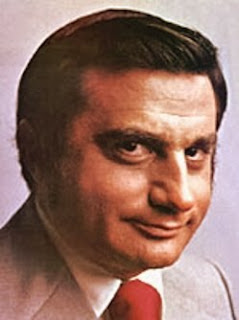 One of my favorite comedy LPs of all time is I AM THE PRESIDENT by David Frye. One of the tracks features President-elect Richard Nixon taking a tour of the White House at 2 a.m. from lame duck President Lyndon Johnson. My favorite line is President Johnson yelling to his wife, "Company is coming up, Lady Bird! Beautify yer self!"

In a skit on the Smothers Brothers Comedy Hour entitled "A Fairy Tale for Our Times," Frye played Presidents Johnson and Nixon, as well as Sen. Hubert Humphrey and Gov. George Wallace.