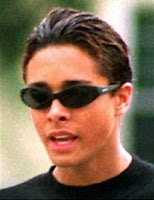 Several blogs and overseas entertainment sights are reporting that Jordan Chandler (pictured above), who accused Michael Jackson of molesting him in the early 90's admits it was lie. He says his father, Evan Chandler, forced him to lie because he wanted to extort money from Michael Jackson.
A sight called Global Grind reports that Jordan now has a restraining order against his father for assaulting him.
So far, no American media outlet has picked up the story yet.
Now that this is out in the open, will someone put When Things Were Rotten on DVD, so people can see how much Mel Brooks re-used for Robin Hood:Men In Tights. That way we can discredit Evan Chandler's writing credit on that movie.
Posted by Desdinova at 9:45 PM