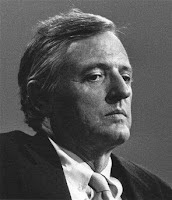 William F. Buckley Jr. has died. He was not the screaming, threatening wacko we’ve come to hear on radio. He was different than those guys. Buckley was more subtle. He used big words which he spoke slowly and softly. He was a Preppy if there ever was one.

He was a fixture on PBS from the late 60s until 1999 (which the talk radio freaks hate). He wasn’t afraid to mix with the other people who probably to see things his way or take him seriously. He was in a crazy question and answer segment on Laugh-In (Allan Sues asked him if he had seen Myra Brekkenridge). On the Tonight Show, Johnny Carson got him to admit to smoking pot. His guest even included Beat poet Allen Ginsburg and Groucho Marx.

He founded National Review in 1955. Former President Ronald Reagan credits the magazine with his switch from being a Democrat to a Republican (Why couldn’t he have read Mad magazine or something else?).

Mr. FaBuckley, as Lilly Tomlin’s operator Ernistine, called him was 82. Here is CNN’s story.
Posted by Desdinova at 5:02 PM