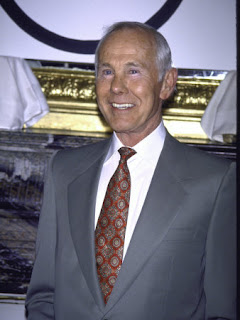 Former Tonight Show host Johnny Carson died five years ago today. He has spent the last week spinning in his grave after it was announced that NBC was firing Conan O'Brien and bringing back Jay Leno.
If Johnny was here today he would say, "I gave the world Art Fern and Carnac. Does NBC really think Leno having people run over a cardboard cutout of Al Gore with an electric car is funny? Now running over Spiro Agnew with a car would be great comedy. Leno knows nothing about comedy. Conan was much better. They should have listened to me in the first place and gave the show to Letterman. Everybody up here Heaven watches Dave for the Sarah Palin jokes alone. NBC has made a mistake this big since Supertrain."
Posted by Desdinova at 2:36 AM