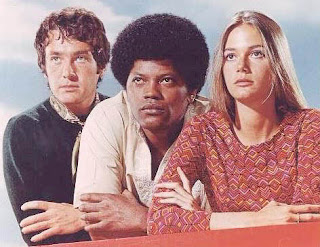 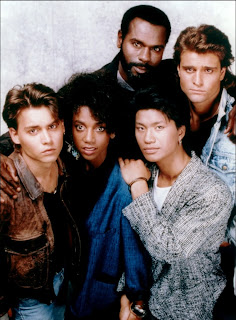 
In TV history, there were two cops shows that featured young people going undercover to investigate crimes involving other youth. These shows were the Mod Squad, which ran from 1968 to 1973. The other was 21 Jump Street, which ran from 1987 to 1991.


I remember watching an episode of 21 Jump Street when it first air on the then-new Fox Network and thinking, "This show sucks. I hope they come up with a better show than this or this network with go the way of Dumont and Overmyer Networks." The show not only ran longer than I expected, but Fox has survived, thanks to several great shows like the Simpsons, Family Guy and In Living Color.


It was about this time that a purchased a book called The Best of Crime and Detective TV: The Critics Choice by John Javna and Max Allan Collins. In this book, they list the TV show, Mod Squad, as one of the worst cop shows ever. They practically trash the show (They also slam Charlie's Angels, which makes me wonder about these guys).


I had only seen the Mod Squad reunion movie from the late 70's, but I still thought it probably had to be better than 21 Jump Street for the simple reason it was made in the late 60s/early 70s. As many of you readers know I have always had a special place for the psychedelic era.


I bought a VHS tape a few years ago that featured two episodes of the Mod Squad. I liked it quite a bit and wanted to buy another, but they were taken off the market for some reason. A year ago, I bought a DVD of the first season of the Mod Squad. It featured a longer version of the pilot episode which was on the VHS tape I had earlier. I have enjoyed it very much and plan to buy another DVD set of the show.


A few nights ago, I found the entire first season of 21 Jump Street on DVD at Wal-Mart for $5. I wondered if my opinion of 21 Jump Street would have changed after seeing more than one episode of the Mod Squad. Maybe I would be blown away by the show which gave us Johnny Depp. It turns out, I was right the first time I saw the show. It still sucks.


While people often malign the Mod Squad for being dated, 21 Jump Street is a product of it's time too. It comes with the things of the 80s that I hated. Bad part is some of those attitudes are still with us, thanks to the Fox News Network. As a matter of fact, I suspect that Bill O'Reilly wrote a few of these scripts under an alias. I bet Sarah Palin was a Jump Street fan.


The Mod Squad was from the age of peace, love and "Do Your Own Thing," while 21 Jump Street was from the age of "Just Say No," "Positive Peer Pressure," "overachieving" and "Vigilante Justice." Also, the characters on 21 Jump Street wear the clothes of that era that my mom forced me to wear. When I moved out and went to SMSU, I started dressing more like the Mod Squad.


First off, let's discuss the theme song and opening credits. The theme song of the Mod Squad was composed by Earl Hagen. Hagen created a tough and fast pasted cops show theme, augmented by a psychedelic/garage band organ. The visual was the main characters running through a dark warehouse.


The 21 Jump Street open featured a theme song sung by the cast that sounded like a bad Debbie Gibson song ("You're gonna learn something when we meet you after school" GAG!). The visuals were goofy clips of the cast from episodes. This gives you the impression you are watching a bad sitcom.


The overall plot of the shows are different in that Peter, Linc and Julie ("One White, One Black and One Blonde") were juvenile delinquents paying their debt to society by becoming undercover detectives. They did carry guns or badges. They often questioned the ethics of what they were doing. Yes, they do use quite a bit of the slang of that era. Pete seems to use the word "heavy" a lot, Julie says "groovy" quite a bit and Linc made the phrase, "Solid, Brother" a part of TV history.


On 21 Jump Street, Hanson, Penhall, Hoffs and Loki are cops who look young enough to infiltrate high schools. They carry guns and badges. When the Jump Street cops aren't whining about lawyers and judges "letting off" the people they bust, they insult each other.


The villains on Mod Squad are never the kids, but old, white guys trying to make a money by selling drugs or killing young people. One villain, played by Dabney Colman (Who else?) tells his sister, "Your hippie friends are driving down the value of my real estate." One villain is a Bill O'Reilly-ish talk show who tries to rape Julie. Yes, the message of the Mod Squad could be "No such thing as a bad kid" and "Don't trust anyone over 30."


On the other hand, 21 Jump Street embedded with the 80's idea of "young-people-are-evil." The criminal is always young. Everything from gun toting gang members taking a school hostage to a group of cocaine pushing, preppy-boys who gang-rape/murder a girl to sexually-repressed, pyromaniac Catholic school girls (No, I didn't make this last one up).


Jump Street episodes usually end with a PSA/lecture from the cast about under-age drinking, drug abuse or abstenence. Mod Squad ended with a crane shot of the characters and somber jazz music as the characters contemplate what just happened. Truth is the Mod Squad has a more expensive look to it than Jump Street.


Yes, this has probably been a useless rant, but I had to get this out of my system. I'm sorry Johnny Depp couldn't have been like Clint Eastwood, John Travolta or Bruce Lee and gotten his start on a good show. As a matter of fact, he has said he hated the show.