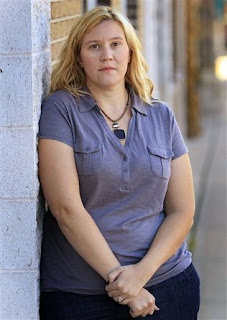 This sounds like the kind of garbage that goes on here in the Ozarks. The Miami Herald has this disgusting story of Autumn Drussell (pictured above). She was the editor of the Stoughton Courier Hub, until she wrote an editorial about how she was shopping at big box chain stores because they had lower prices. She suggested that local business owners improve customer service and "stop bad mouthing their areas."
That caused a doofus with a hardware store to write a snide and threatening letter to the editor about Drussell. In the letter, he also said he wouldn't advertise with the newspaper again. She was demoted by the management of the newspapers owners, Unified Newspaper Group, which is a division of Woodward Communications Inc.
I have seen this too much in my years with various local media groups. Probably, the salesmen started wetting their panties and crying that the local business owners, who are probably arrogant jerks, will drop advertising. They (sales people) go to management and ask for Drussell to be punished or fired. Management, being both greedy and gutless, demote Drussell for writing an honest opinion piece.
This story sounds like a Sinclair Lewis novel.
Now, if this was the Ozarks, the newspaper would then replace the educated and experienced journalist (Drussell) with either a Republican party operative or an Republican business man, like an auctioneer, who have no experience or education in journalism or media. Or worse, a sales person talks management into letting his redneck brother-in-law write editorials. Sadly, this is the is the mentality of the local media.
This is the kind of opinion that makes me the SUPER VILLAIN OF THE OZARKS!!! Mwu-HAHAHAHAHAHAHAHAHAHAHAHAHAHA!!!
Posted by Desdinova at 10:24 PM