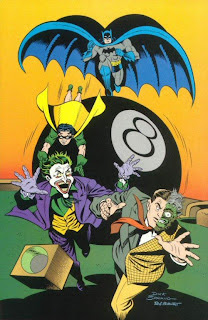 In March, I predicted the Dark Knight would suck. This was based on the publicity photos I was seeing of Heath Ledger playing the Joker. I had a feeling this was going to be like that Hallie Berry/Catwoman movie a few years back. I took some flack about it from some fanboy. Last week, I decided since this has been a very popular (or unpopular) post, I would do the honorable thing and see The Dark Knight.
THE DARK KNIGHT DOES NOT SUCK - BUT I STILL DIDN'T LIKE IT. It was a very good, well-crafted, scripted and shot film. The cinematography is well worth the ticket. Heath Ledger's Joker is creepy and, at times, funny.
It still isn't the Batman I grew up with. Most of the The Dark Knight script was influenced by comics made after 1986. The exception was a story I remember reading when I was ten years old in a Batman digest. The story was from 1973 an entitled "The Joker's Five Way Revenge."
Even that story didn't have the body count of this film (However, there have always been rumors about the Joker in this story, which may have explained the Joker/Ledger quoting the line from Brokeback Mountain and his "nurse" disguise).
One thing missing that the previous film and TV versions, (Okay, I've still not seen Batman Begins) except for the movie serials, had that was a trademark of the comic books for many years - giant, working models of everyday items. I would have loved for Ledger to have killed several innocent bystanders with a sign in the shape of a giant ear of corn. He would have then said to Christian Bale, "I know. My humor is corny."
See I grew up preferring the stories of the 40's - 70's. The artwork by Dick Sprang (see above) and Carmine Infantino (SP) coupled with what one DC writer referred to as "the Chamber of Commerce Batman." It was this Batman that was on the TV show in the sixties and Saturday morning cartoons of the seventies. The Batman of my childhood doesn't sound like he gargles Draino. Actually he sounds like the mayor on Family Guy.
Also, once more (some one posted a comment that agreed with me on this) I ask "Why did the Joker look like he put his make-up on in the back seat of a school bus on a bumpy road?" I prefer the dyed skin concept from the comics.
However, I like the idea of a villain centered movie. How about DESDINOVA THE SUPER VILLAIN OF THE OZARKS movie?
Posted by Desdinova at 4:30 AM