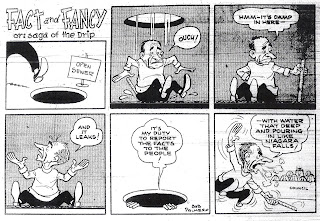 My roommate (who is also my twin brother - I'm the evil twin you always hear about) found this Bob Palmer cartoon in a 1959 News Leader. I think the idea of a speaker at city council exaggerating things is funny, but then I realize the character maybe trying to get improvements on the drainage system which as you know is one of my pet peeves.
Either way it shows somethings never change, except Jason isn't there to tell us which councilman has the best tie. The way Palmer drew the city council it looks like they didn't have any necks.
Posted by Desdinova at 5:16 AM